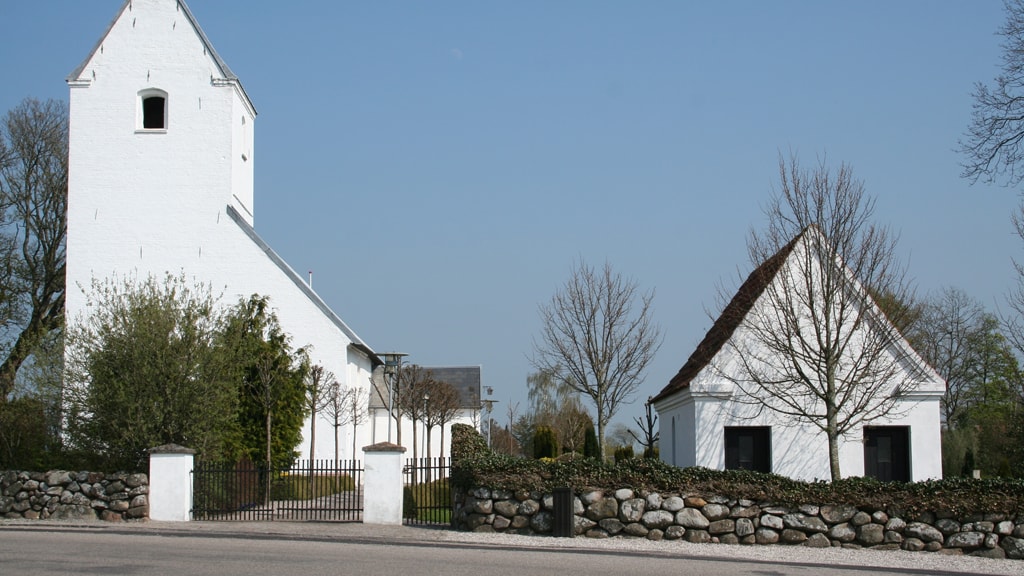 The city of Randers was founded on the spot where the crossing of the Gudenå from north to south through Jutland was easiest - or vice versa. The name Randers also means "the city on the hill at the mouth", and here in the Viking Age a trading town arose.

Since the Viking Age, the town has thrived on trade, thanks to the fertile upland and the good possibilities of transportation on land and on the river. The many rich merchants of the town built beautiful half-timbered houses, and many of these can still be found in the old centre of the town where today pedestrian streets and a selection of exciting shops can be found. This route provides excellent possibilities of exploring the surroundings of the town, first to the north and then south of the town.

The railway from Randers to Hadsund opened in 1883 and was closed down in 1969. The 10 km-long cycling path from Dronningborgghallen through Lem to Spentrup was laid out on the old railway tracks.

The church, which is from the 1200s, houses very beautiful chalk murals. They can be found in the nave as well as on the chancel arch and probably originate in the time just before the Reformation in 1536.

The poet Steen Steensen Blicher was a priest in Spentrup from 1825 until his death in 1848, and here he wrote a number of his most famous poems and novellas, e.g. “E Bindstouw”. In Blicher’s memorial room in Malvina’s House, one can see some of his manuscripts and personal effects such as his desk. The house is named after Blicher’s much-beloved daughter Malvina who lived in the house after she married the administrator of the vicarage. Spentrup Church is a Romanesque church, constructed from granite ashlar blocks and with a late-Gothic tower. In the chancel arch, well-preserved chalk murals from approx. 1225 can be found, and the votive ship “Tordenskjold” was put on display for the first time in connection with Malvina’s wedding in 1838. Blicher’s burial plot can be found in the churchyard here.

Hvidsten is first and foremost known for its royally licensed inn, which was founded back in 1634. Since 1884, the Fiil family has owned the inn, and today it is run by the fourth generation. Innkeeper Marius Fiil formed the Hvidsten Group in 1943, which was in charge of receiving weapons drops to the Danish resistance movement during the German occupation (read more under the route The Hvidsten Resistance Group).

Råsted Church was probably founded in the first half of the 1100s. It is known for its beautiful chalk murals, which are approx. as old as the church itself, and which have been called Denmark’s most extensive and best-preserved murals from the Romanesque period. In the chancel arch for instance, one can find a mural of the Fall of Man. Adam seems to have two heads, but the one head is just a sketch (the paint layer is so thin that in many places, the artist’s preliminary work is visible).

Ålum Church is the home of a total of no less than four beautiful rune stones from the Viking Age from the last half of the 900s. Originally they were not standing at the church, as they can be dated to the time, before the Christian faith was introduced in Denmark. This means that they were erected before the village churches were built, and probably they were originally standing along the main roads of the Vikings, where they have reminded the passers-by about the dead persons and their great achievements. The two largest rune stones stand outside the church, whereas the two smallest (which are only fragments) can be found inside the porch of the church.

Langå originates as a railway town in connection with the construction of the railway from Aarhus to Randers in 1862 as well as the branch line from Langå to Viborg in 1863. On Novermber 17, 1943, the Danish resistance, blew up the railway bridges near Langå. This action echoed throughout Europe and was the most important example of railway sabotage during the German occupation of Denmark, 1940-45, as it stopped all train traffic on the north-south going Jutlandic railway for 12 days. Amtmand Hoppes Bro (“Prefect Hoppe’s Bridge”) is the name of the oldest road bridge across the river Gudenåen in Langå. It was built in 1905 and was then the first reinforced concrete bridge in the country. To accommodate the barge traffic on Gudenåen, the bridge was built with a height of 4.95 metres above the water level of the river. Today, only cyclists and pedestrians use the bridge.

At Fladbro the Nørreå falls into the Gudenå, and at this location there has been both a bridge and an inn for several centuries. On his great Jutland tour in 1859, Hans Christian Andersen enjoyed open sandwiches and port in Fladbro Inn. After his visit he went by carriage to Hjermind vicarage, and it was on this tour that he wrote the song “Jylland mellem tvende have”. Randers Deerpark with a fine population of deer is situated in Fladbro Forest.

Way back the Gudenå was an important means of transportation to and from inner Jutland, and the traffic was brisk by means of barges on the river. The barge service had its prime time in the last half of the 1800s, and horses or men on the banks hauled the barges along the so-called bargeman’s path. The cycling path follows the bargemen’s route from Langå to Randers. The path goes through the lovely scenery of Vorup Meadows. There are several bird towers, from where it is possible to watch the rich bird life and free-living bison, which graze in the meadows.