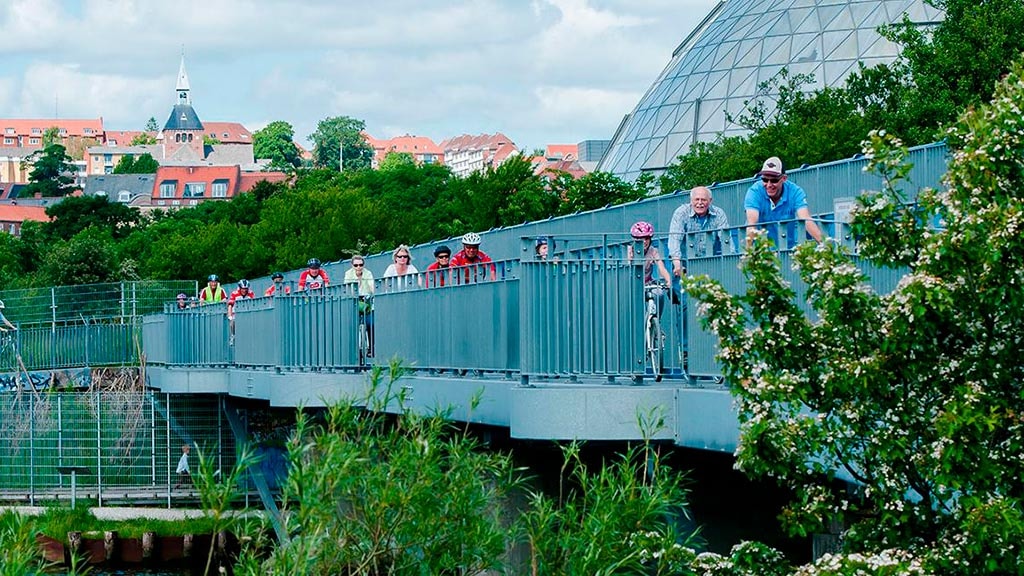 Cycling route: Around the remains of the Gudenådelta

Photo: Randers Kommune
Activities
Tour suggestions
Just before the expiration in Randers Fjord, the Gudenå formed a delta for millennia. This tour leads all the way around the old delta and along the way there is the opportunity to study the bird and wildlife from two bird towers.
Address

For thousands of years, just before running out into Randers Fjord, the river Gudenåen formed a delta. Farmers made hay in the wide river valley, and the area was also frequently used as a grazing are for cattle. However, it frequently occurred that river overflowed its banks so that the meadows and surrounding fields were flooded, and in 1951 this lead to the removal of the delta. Dikes were built so that the Gudenå was cut off from the meadows of Vorup Enge and later from those of Hprnbæk Enge north of the river. When the water was pumped away, it became possible to sow grain here.

In 2003, the process of reclaiming the great wetlands along Gudenåen close to Randers was started. This route leads all the way through the old delta, and along the way it is possible to study the bird and animal life from two bird towers. If one brings lunch along, it can be enjoyed in the pavilion.

The Gudenå and Vorup Enge

In Vorup Enge, the pumps were stopped in 2003, and the dikes were broken, resulting in the creation of a lake shortly thereafter. In the meadows of Hornbæk Enge, the process was repeated when the pumps were stopped in 2009 so that once again the waters of Gudenåen could flood the area. Thus, so-called wet meadows were created to the great benefit of both birds, animals, and plants.

Way back the Gudenå was an important means of transportation to and from inner Jutland, and the traffic was brisk by means of barges on the river. The barge service had its prime time in the last half of the 1800s, and horses or men on the banks hauled the barges along the so-called bargeman’s path. Part of this path is no a cycling route, leading through Vorup Enge. The path goes through the lovely scenery of Vorup Meadows. There are several bird towers, from where it is possible to watch the rich bird life.

The nature centre is constructed as a sustainable demonstration project and provides nature experiences and aims to educate children and adults alike about the surrounding nature.