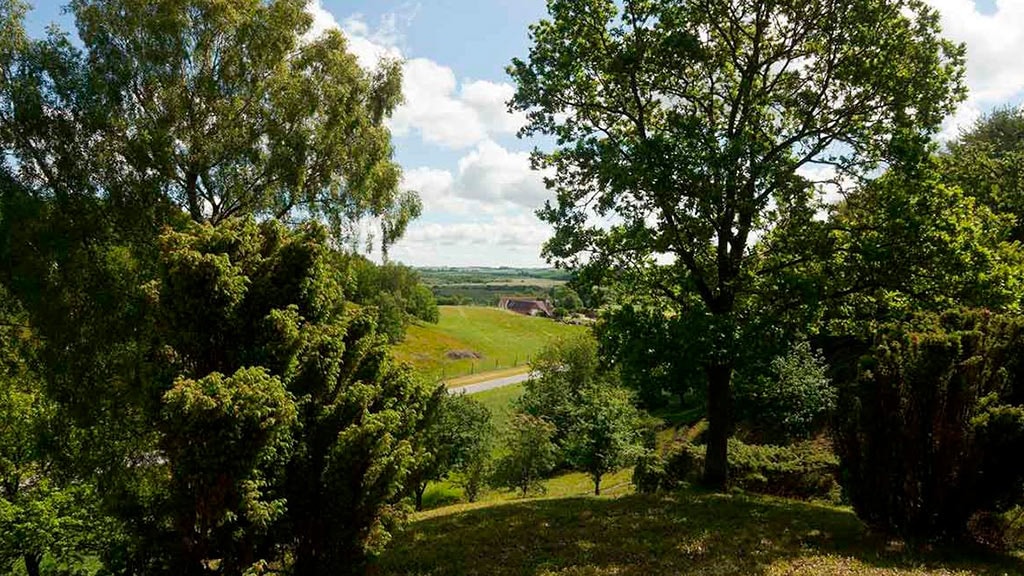 The tour first goes along the Gudenå through the Vorup Enge nature area and past Fussingø Castle and Fussing Lake, before reaching the protected nature area Læsten Bakker, where animal and plant life is incredibly rich.

This tour west of Randers leads at first along the Gudenå through the nature area Vorup Meadows and past Fussingø Castle with the idyllic Fussing Lake, before you arrive at the preserved nature area Læsten Hills, where the animal and plant life is remarkably rich. You can experience the birds, the animals and the plants on close range, because a number of public paths lead through the area, and a tunnel makes it possible to watch the animals without disturbing them. It is a good idea to have a picnic while enjoying the beautiful landscape. The tour back to Randers leads through Fårup and Bjerregrav.

Way back the Gudenå was an important means of transportation to and from inner Jutland, and the traffic was brisk by means of barges on the river. The barge service had its prime time in the last half of the 1800s, and horses or men on the banks hauled the barges along the so-called bargeman’s path. The cycling path, which starts at Randers Regnskov Tropical Zoo, follows the bargeman’s path on the stretch from Randers to Langå. The path goes through the lovely scenery of Vorup Meadows. There are several bird towers, from where it is possible to watch the rich bird life.

At Fladbro the Nørreå falls into the Gudenå, and at this location there has been both a bridge and an inn for several centuries. On his great Jutland tour in 1859, Hans Christian Andersen enjoyed open sandwiches and port in Fladbro Inn. After his visit he went by carriage to Hjermind vicarage, and it was on this tour that he wrote the song “Jylland mellem tvende have”. Randers Deerpark with a fine population of deer is situated in Fladbro Forest.

The Læsten Bakker (hills) were created during the last ice age and are characterized by dry, heather-clad slopes with few trees. The highest point is Kragbjerg Hill (57m), from where you have a fine view of the whole area. Peats were dug here during World War II.

Actually Fårup consists of two towns: the youngest is the town with the railway station, which arose, when the railway between Randers and Aalborg opened in 1869, and which became a railway junction, when the private railway was established between Viborg and Mariager in 1927. On the eastern side of the railway you will find the old village with the ancient Romanesque church. The exciting frescoes of the church from the first part of the 1200s represent among other things Cain and Abel. Around the picture of Cain you can read a Latin writing, which translated into English goes like this: “Found guilty in the killing of his brother”.

The tour leads through Bjerregrav railway town, which arose together with the railway from Randers to Aalborg. The road leads 2 km uphill to the old village Øster Bjerregrav. A large amount of peats were dug in Bjerregrav Bog during World War II, but today the bog is an Eldorado for animals and birds.