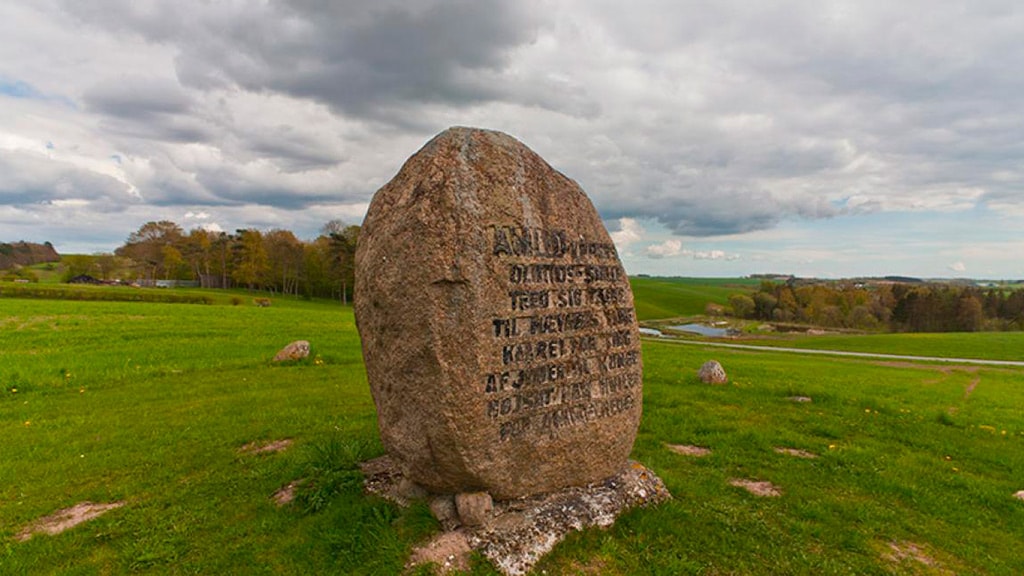 It is the chronicle writer Saxo Grammaticus, who about the year 1200 tells the story of the Jutland chief son, Amled. Amled must have lived around the year 500, and when he himself died, he must have been buried at Ammelhede by Randers, the target of this trip.

It was the Danish chronicle writer Saxo Grammaticus, who told the story about the Jutland chief’s son Amled around year 1200. His uncle, who then married Amled’s mother, killed his father. Amled revenged the killing of his father, but it was not until after he had played dumb and mad, so that the uncle did not begin to suspect him. First and foremost, the story is known from Shakespeare’s play “Hamlet”, which was published in 1630. Shakespeare, however, moved the action from Jutland to Kronborg Castle at Elsinore. Amled is supposed to have lived around the year 500, and when he died, he was said to be buried on Ammelhede at Randers, which is the target of this tour.

Romalt Bakker (hills) are a hilly area with wood growth, for instance a real “ogre wood”, and old gravel pits.

Up to 1865 Essenbæk Church was situated on the edge of the slopes down to Randers Fjord, where we find the residential neighbourhood of Assentoft today. The church was built in the 1100s, but in the end it had to be torn down owing to decay. Instead the church was placed at the main street in Assentoft. Around 1150 a monastery was established in Essenbæk, which as time went by became very wealthy and got to own large lands of property south east of Randers. After the Reformation in 1536 the monastery was incorporated in Dronningborg Entailed Estate, but today there are no traces left of the monastery.

In Uggelhuse you can get as close to Randers Fjord as possible, and both an old landing place and a newer yachting harbour are situated here. The landing place used to be the life nerve of the town, because it was here that the catch of fish, the reeds and the rushes were landed. From the 1860s the production of rush shoes was an important extra source of income for the poor fishermen. Rush shoes were produced in almost every house of the village. The women weaved, and the men sewed in the evenings, when they had returned from fishing and the harvesting of reeds. The most hard-working rush shoemakers could supply seven dozen a week for the buyers all year round. The tradition is still upheld in Uggelhuse, and in our present time there is still a large demand for the original rush shoes.

Between Assentoft and Uggelhuse you will find the Randers Fjord Feriecenter and Café Kærbo, which is ideal for a lunch break.

Actually “Hamlet’s Grave” on the heath Ammelhede is a grave mound from the Bronze Age. It is situated in the middle of a field, and in the course of time it has been dug out and plundered. Originally it was perhaps 2½ meters high, when the Bronze Age farmers built it more than 3,000 years ago. When the National Museum of Denmark examined it in 1950, it was empty, apart from some few fragments of clay pots, but in the middle the archaeologists found traces of a stone coffin. The area has had a considerable amount of grave mounds, and several finds suggest that in ancient times this area has had an especially high status. The Danish writer Saxo tells about Amled, that he was killed in a battle in a field named after him. It is true that we have a number of other localities in Denmark, where “Hamlet’s grave” is shown, but this is the only place, where there is a connection with a local name of a locality. Owing to this fact Randers Tourist Association took the initiative in 1933 to raise a memorial stone on the grave mound. On the stone you can for instance read: “Kåret på ting af jyder til konge, højsat han hviler på Amled Hede” (proclaimed a king by Jutlanders, he rests on Amled Heath). However, it is not known whether Amled has ever existed. It is a legend, but it is almost certain that Amled has never been buried in the grave mound, which is approx. 1,700 years older than him.

Hørning Church is a rather big Romanesque building from the beginning of the 1100s. The stone church replaced an older wooden church, which was situated in the same place, and this building was erected on a grave mound from the Viking Age, where a distinguished woman was buried around year 950. Her grave is considered one of Denmark’s most beautiful Viking Age graves, and together with the wooden church it suggests that in the Viking period, this area was the home of a clan of people with a high status.