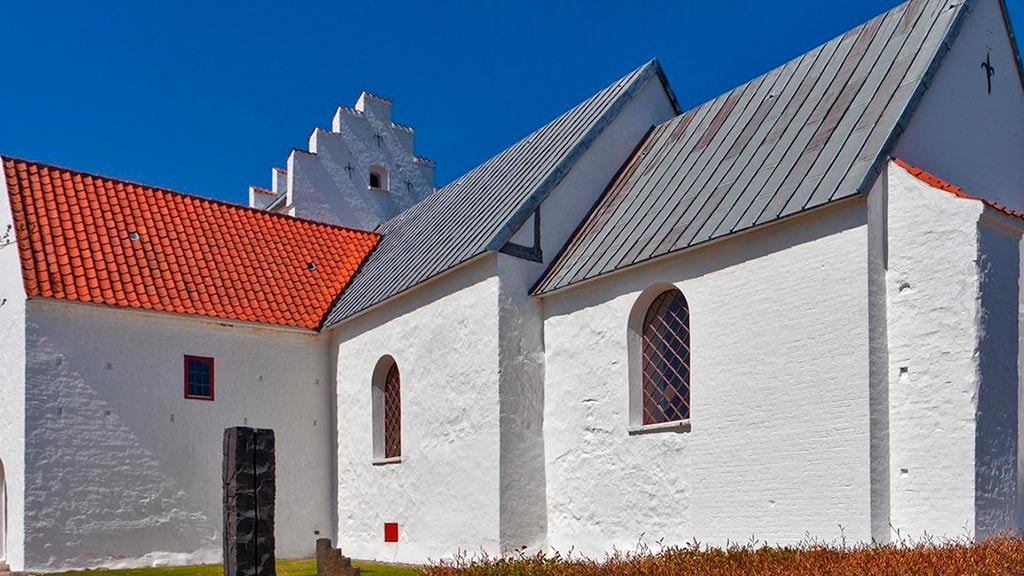 Photo: VisitRanders
Activities
Tour suggestions
In the municipality of Randers there are about 350 visible and preserved ancient monuments: burial mounds, stone jets from the Stone Age and rune stones from the Vikings.
Address

Parking: Fx. by the churches on the route.

The rune stones from the end of the 900s and the beginning of the 1000s are the first historical sources, from which it is possible to get an impression on print of our ancestors’ achievements. As a general rule the stories of the rune stones are short and only mention the names of those, who have erected the stones and those, who have been honoured in this way. However, Denmark’s history begins a long time before the rune stones; from the time, which is called the prehistoric time, we have a large number of relicts of the past. In Randers Municipality alone there are approx. 350 visible and preserved ancient monuments, first and foremost grave mounds and dolmens from the Stone Age and a large number of grave mounds from the Bronze Age. From the historical time we have – besides the rune stones – for instance castle mounds from the Middle Ages and old church sites. This tour starts and ends in Hvidsten, leads past some of the most exiting ancient monuments in the area north of Randers.

Hvidsten is primarily known for its royally privileged Hvidsten Kro, which dates back to 1634. Since 1884, the inn has been in the Fiil family, and is today run by the fourth generation. The owner Marius Fiil formed the Hvidsten Group in 1943, which was responsible for gathering the weapons for the Danish resistance movement during the German occupation - see more under route the Hvidsten Resistance Group.

Asferg church is a Romanesque church, which can be dated back to approx. 1080 and thus the end of the Viking Age. The style of building is Anglo-Saxon-Norman and shows that the Vikings have met the Christian faith on their expeditions to England and thereafter brought Christianity back with them to Denmark. The special feature of Asferg church is that the tower is as old as the rest of the church; by far the most of the village churches of Denmark did not get their tower until the late Middle Ages.

At the end of the blind road Ejstrupvej you will find the dike Dandiget, which can be dated back the first part of the Iron Age (approx. year 0). The dike is up to 2 meters high and is preserved on a stretch of approx. 1.2 km. The dike has been named after legendary king Dan, and we presume that the mound has once marked the frontier between the kingdoms of two of the Iron Age kings.

In the porch of the church stands a rune stone, which can be dated back to approx. year 1000. The inscription is: “Halle rejste denne sten, Lettes søn, efter Asulv (?), sin broder” (Halle raised this stone, Lette’s son, after Asulv (?), his brother). The stone is one of a total of 30 rune stones, which have been found in the triangle between Hobro, Randers and Viborg.

Glenstrup Sø, which is approx. 4 ½ km long, is the largest lake in Northern Jutland. With a depth of almost 31 m it is also one of Denmark’s deepest lakes. In the end of the 1000s the Benedictine monks founded a monastery on a hill south of the lake. North of Glenstup Church springs the water full Mariekilde, which was a holy spring in the Middle Ages. A market was held in the spring each year until 1552, and it attracted people from near and far. Two rune stones have been found in Glenstrup, one of which is standing in the porch of the church today. Like the church in Asferg the large church in Glenstrup is from the end of the 1000s and has perhaps functioned as the monastery church of the Benedictine monks.

In the years around 980 the Danish Viking king Harald Bluetooth built a number of circular ramparts of exactly the same dimensions namely Aggersborg, Trelleborg, Nonnebakken in Odense, Borrering at Køge and Fyrkat. The inner diameter of the rampart is 120 m, and there was room for 16 long houses inside the rampart. The rampart can still be seen in the terrain, and it is possible to see a reconstructed long house. Vikingecenter Fyrkat is situated close to Fyrkat, and it is furnished in a reconstructed Viking farm.

Close to the road not far from Katbjerg you will find a number of graves from the Stone Age. Kongehøj is a 52-m-long long barrow with two chambers, whereas Ormhøj is a passage grave with a secondary chamber. The most famous grave is the passage grave Jordhøj, and all of the three graves are from the period 3.300-3.000 BC. When the archaeologists dug out Jordhøj in 1890, they found a totally untouched chamber. On the floor there were cut planks from wooden coffins, flint daggers and clay pots, and the excavation showed that the Stone Age people managed to build a totally tight chamber with a dry indoor climate.

A path leads to the remains of the base and the ground plan of a church or a chapel from the 1200s. There is no information, neither about the building of the church, nor about its function. Likewise we do not know, when it was torn down, but probably it became superfluous after the Reformation in 1536.