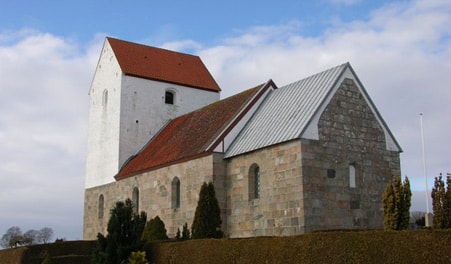 The church, which is of a rather impressive size, is placed in the outskirts of Råby and consists of a Romanesque choir and nave. The church rises in a distinctive manner with its castle-like tower with the transverse roof. A large and tall porch has been erected facing north. It is made of red and yellow mediaeval large bricks in tile belts. The ornamental gable filling walls indicate a construction time around 1550. Råby Kirke is decorated with fantistic murals which were uncovered in 1918.

In Denmark in the late Gothic style, fabulous beings appear in the murals. People thought that the beings existed at the end of the earth and that they were created by God and thus had to have a meaning such as God's punishment for sin. The function of the fabulous beings on the church walls has partly been decoration, and it may be a case of satire, and they have personified the 7 mortal sins of the Middle Ages as may be seen in Råby Kirke.
Address